Audio/Visual Presentation Equipment – Buying your own

OK, the first (and very reasonable) question one might ask on this subject, is – why would anyone want to? Most venues have what’s required, you simply need to spend a little time with the equipment before the event – to verify that it’s OK and you know how to use it – and that’s it.

All very true, but well, sometimes, the equipment at the venue goes wrong, or doesn’t suit your laptop/software etc, and it is comforting to know you have a back-up which does work. And sometimes, as well, it is useful to have your own equipment in order to conduct meetings at your own base; or at a hotel or whatever, which isn’t particularly well set-up as a meeting venue.

If you hire you take the risk that the equipment isn’t what was expected when it turns up, and then you’re most likely ‘stuck’. Hiring long term is, usually, ‘hire purchase’ in all but name.

People who do a lot of presentations at many different locations around the country, which they don’t always have the opportunity to check out, will generally have their own equipment.  In these circumstances, it’s easier just to set up your own stuff, rather than have to learn other people’s.

The second question, perhaps, if I do need to get some of my own equipment, what should I go for?

Let’s first of all be clear about the difference. A (digital) projector, does just what it says, it projects a large image from a digital source, (eg your laptop – running PowerPoint or similar) onto a simple, textile, screen. There are many manufacturers of projectors, and they all work with a variety of software/hardware set-ups.

A SMART board is a projector/camera/screen/software combination. An image from your laptop can be projected, as before.  But in addition, you can interact directly with the screen, and even ‘write’ onto it (with ‘dummy’ pens). A camera picks up your movements, and adds the appropriate pen marks to the image being projected, so it looks as if you’re drawing on the screen. Of course, go on to the next display, and your writing has disappeared (though it may be saved on file to reappear).

A SMART board gives much more scope to the presenter, but also, costs a lot more – about three times as much – and the SMART technology itself is only available from one source (though there are other interactive whiteboard systems now).  If costs are an issue, do you really need the extra functionality? 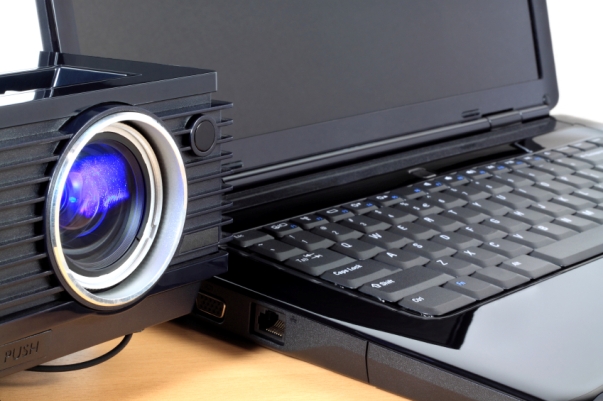 You can use either your laptop or projector, audio output socket, to provide audio for your presentation.  If you’re presenting to no more than about twenty people, in an appropriately sized room,  your sound requirements will be met by normal computer-type speakers  (of 10 watts or so).

If you are envisaging presenting to many more people than that, you will need a PA.

But if this is the case, remember that you don’t really require more than four ‘channels’, and normally, less than 500 watts. Only if you intend filling a theatre, or an outdoor space, would you need a more powerful system than this.

Also, it really is best to buy the type which comes ready encased in sturdy outer cabinets.

Generally, the normal audio output socket of your laptop (or projector) is a stereo ‘mini-jack’; you will need a cable which converts from one mini-jack at the computer ‘end’ to two 1.4 inch jacks at the PA end.

If you need a PA, you will also need at least one microphone, and it’s best to have at least two.

What is probably most practical for general use is to have one lapel radio mike, and one handheld radio mike. You can get radio mike sets which include both types, but usually, and annoyingly, you can’t use both together, there’s only one ‘transponder’ (which plugs into your PA). Therefore you may well have to buy the lapel and the handheld mikes separately, and plug them in separately as well of course (remember you have up to four ‘channels’ to plug things into). Remember also, that if the microphones are to be used together, they must then utilise distinct and separate RF frequencies.

Why have two mikes? Well, firstly, it is often quite handy to be able to hand around a microphone to members of the audience, so that you and everyone else can hear their contributions: you will want to have a microphone yourself, at the same time, naturally.

Secondly, you do need a hand-held mike as a back-up, because there are situations in which feedback is a problem, and hand-held mikes – which can be held close to the mouth – do not suffer from these problems as much lapel mikes.

You get what you pay for, but also there’s no need to pay for more than you need. If you buy from a reputable supplier, making sure you see a demonstration of the equipment first, and keep within the parameters indicated above, you really shouldn’t go very far wrong.